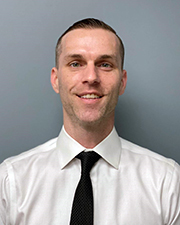 Nicholas D. Fine is an associate at Orbach Huff & Henderson. Nick’s practice is focused on representing public school districts and other public agencies throughout the state in a variety of litigation, transactional and administrative matters.

Nick has an extensive background in civil litigation and has litigated a significant number of state and federal actions from initiation through conclusion, whether settlement or adjudication. Nick has also represented clients in numerous appellate matters before state and federal appellate courts, including the Ninth Circuit Court of Appeals. Additionally, Nick is experienced in our transactional practice, primarily focusing on construction projects for public school districts.

When he is not working, Nick enjoys spending time with his black Labrador, Archer, running, reading, and is an avid fan of the Golden State Warriors.

Nick received his Juris Doctor from the University of San Diego School of Law.

Nick is admitted to the California State Bar to practice in all state courts, and is also admitted to practice before the United States District Court for the Central, Southern, Northern and Eastern Districts of California.